How to turn off mobile data for apps on Samsung

Allowing an app to use your internet connection doesn’t always come in handy as some apps show accompanying advertisements after a specific interval. To stop viewing in-app ads, you can turn off mobile data for apps on Samsung or Android mobile using this step by step guide. For that, you need an app called NetGuard, available for free on the Google Play Store.

At this moment, Samsung or any other Android phone doesn’t have an option to restrict apps from using data. Thanks to the Android 10 feature update, users can now use two apps side by side irrespective of the device they are using.  At times, you might want to keep using internet connection on Google Chrome but you do not want to use mobile data on a game. If that scenario emerges, you can stop apps from sharing or using your mobile data.

Also, let’s assume that you want to play games but you do not want to get agitated by WhatsApp or Messenger messages. Although you can disable WhatsApp notification on Samsung mobile, you can turn off mobile data for WhatsApp on Samsung or any other Android mobile too.

As mentioned earlier, you have to install an app called NetGuard. NetGuard is a free app compatible with Android 5.1 or a later version. In other words, if you have a present days Samsung mobile, you do not have to check the version number as well. Although NetGuard has a paid version, you do not have to spend money on it to get the feature you are looking for. The free version is more than enough since it allows users to turn off WiFi and mobile data for specific apps on Samsung or any other Android mobile. Make sure you have the app on your mobile before going ahead.

How to turn off mobile data for apps on Samsung

To turn off mobile data for apps on Samsung, follow these steps:

To get started, open the NetGuard app on your Samsung mobile. You can find a list of all installed apps on your screen. Choose the app you want to stop from using mobile data or WiFi connection.

Tap on the cellular data or mobile data icon. Similarly, you can tap on the WiFi icon to prevents particular app from using WiFi on Samsung or Android mobile. 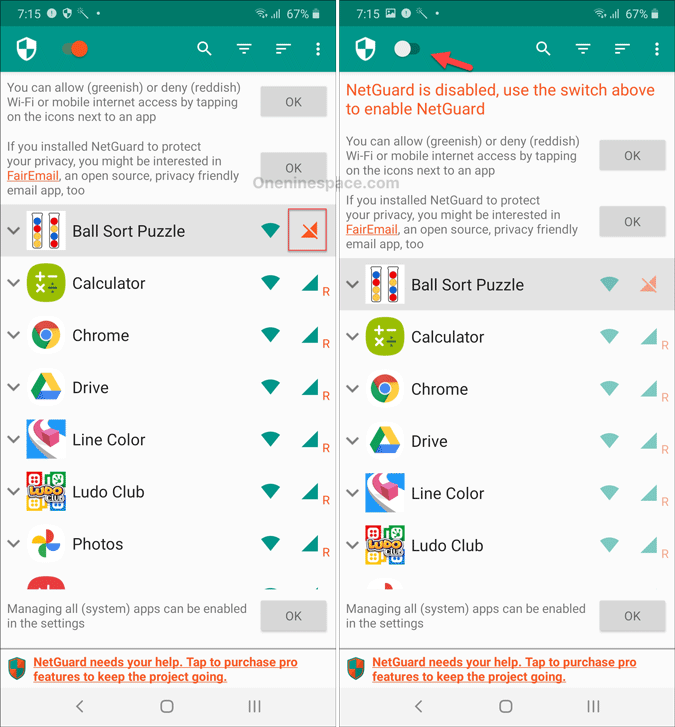 Tap on the toggle button visible on the top-left side of your screen. Now, it asks you to tap the OK button so that it can create a local VPN connection or install a local VPN profile on your mobile.

After you are done with this step, you are good to go. Also, it may ask you to remove it from the battery optimization list. It is possible to keep using this app uninterruptedly even after ignoring this message.

If you can spend some money on this app, the following features will be included in the list- View blocked traffic log, Filter network traffic, New app notifications, Network speed graph notification, Appearance (dark theme), etc.

Final word: Turn off cellular data or WiFi for apps on Samsung

Before using this app, you should keep a few things in mind. One, make sure you are not applying it for an essential app – such as banking apps, UPI apps, etc. Otherwise, you won’t be able to use that app when needed. Also, if you stop WhatsApp or any other messaging app from using internet on mobile, you won’t receive latest messages and notifications.