How to Install Windows Software on Linux Ubuntu

If you are trying to install and run Windows software on Linux Ubuntu, you cannot do that directly. For that, you need a medium that will make Windows applciations compatible with Linux distributions so that you can run Windows apps on Linux OS. If you are thinking if you can run .exe in Linux or not, the answer is ‘yes’ and we will walk you through the process.

Being a Linux user is easy and tough at the same time. If you are moving from Windows to Linux, the first problem you will face while installing your favorite software. Nowadays, developers are trying to release a Linux version of their product after an inordinate raise in the market share of Linux operating systems. Despite of that, it is a very common issue among people who like to install everyday software like Notepad++, Photoshop, Microsoft Edge, etc.

You can dual boot Windows and Linux Ubuntu to open a .exe file, but it might not help when you need to use the Ubuntu operating system only. There are more other methods that let you do the install and use Windows EXE files on Linux. But, we are going to use WineHQ.

What is WineHQ for Linux?

WineHQ is a Linux software that allows users to install Windows applications on Linux, Mac, FreeBSD, and Solaris OS. In spite having some limitations, WineHQ is considered to be the best utility to install and run Windows apps on Linux Ubuntu or any other distributions.

To get started with Wine, you need to install it in traditional method. That said, it is not available in the official store or app repository and you need to use the Terminal to execute a couple of commands to get the job done.

How to install Wine on Linux Ubuntu?

The following steps show how you can install Wine on Ubuntu 19.10. If you are using other version of Ubuntu, the same steps need to be imitated followed by some minor changes that are mentioned accordingly.

Step: 1: Open the Terminal on your computer by pressing Ctrl+Alt+T, or, alternatively, you can search for it. 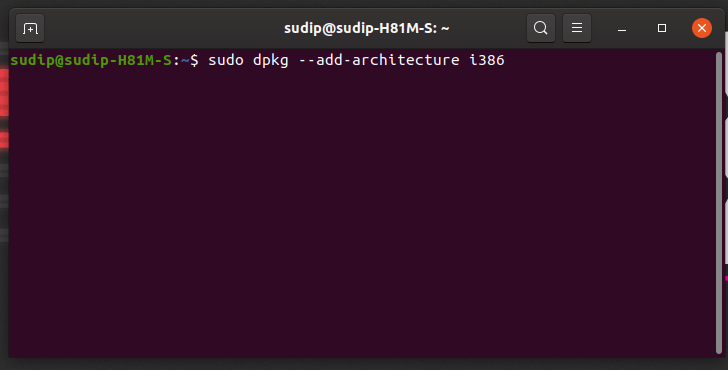 Step 4: Add the Wine repository by using this command-

This aforementioned command is only for Ubuntu 19.10. A minor change requires to be done before entering the command, if you are using other version of Ubuntu or Mint. 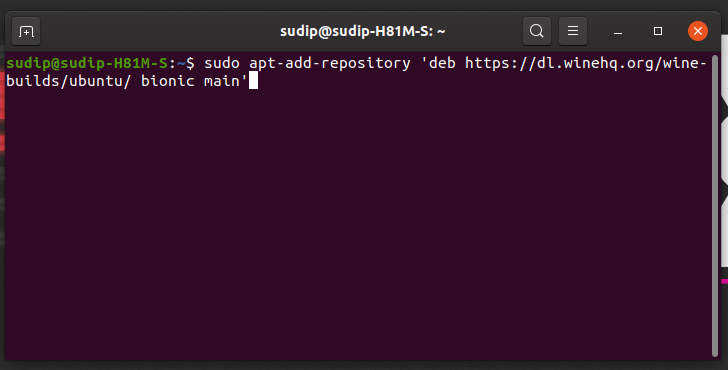 Step 5: You need libfaudio0 library to use WineHQ successfully. As it doesn’t come as pre-built, you need to execute these commands to get it added-

As you execute these commands, your installation is complete and now you can install and run Windows software on your Linux installation.

How to install and run Windows software on Linux Ubuntu

That’s it! It is how you can install and run Windows applications on Linux.

There are some other tools and methods, to name a few, PlayOnLinux, Virtual Machine, etc. that assist you to run Windows software on Linux at times. We have enlisted some of the best methods you can follow to experience something good.

As the name says, PlayOnLinux is specially made for gamers, who want to experience the gameplay on a Ubuntu computer. Other than gaming, some Windows applications are available to install and use. PlayOnLinux has a great userbase, which helps new users constantly so that people can get over with the problem quickly. A simple command can do the job for you-

While installing it on your machine, it displays some prompts to install categories like Education, games, Office, Other, etc.

Lutris is equally good when you are missing your favorite Windows game that is not available for Linux. As Lutris is intended for gaming, you might need a good resource to install and run various games through this medium on your Linux computer. No matter whether you want to play a simple game or something strategic like Overwatch, you can do that with the help of this tool. To install Lutris on Ubuntu or Linux Mint, use these commands-

Both of these tools use Wine in the background to allow users get the Windows apps on Linux environment. However, you would not encounter any problem while using Wine via these tools.

Concluding everything, we might have to say that nothing on this list is perfect and you cannot run every Windows software on your Linux distribution. However, these tools make everything easier for users when they need to install and run Windows exe software or applications on Linux. If you ask us personally, we would suggest you to go with the very first solution on this list.

Amazing Website, Stick to the useful job. Thanks for your time!